Can you make an Android version?

Can you add a harder difficulty? A pretty simple way to do that would be to add Game Speed/ Time Scale slider to settings.

I've been playing this for days now. It's the closest game in spirit to Hotline Miami I've ever seen. Simple clear fast-paced mechanics + one mistake on either side means death + immediate restart on failure = a great fucking game. Thank you, I missed that thrill

I've downloaded this game a few days ago for a game night and can't stop playing it since. It absolutely slaps.

The game is very hard. it delivers what is expected of it. it's very on point.

This is so fun. Can't wait to introduce it to my friends and absolutely destroy them after practicing a bit.

Really cool game. The combat is surprisingly deep for the limited controls, which makes it all the more fun to get better. Can only reccomend playing it with a friend.

Well, the game is GREAT a 8/10, a very HARD game to be a master, but good to pass the time

I hope the gameplay loop is addicting or you somehow ace the story component of each encounter..build it up like an anime episode so we anticipate the next battles we encounter (if it ends up being sort of like a boss fight game)

Very good game but the cursor moving up on its own is very annoying i die alot due to it. the only bad part is u can only fight 1 dude and thats the whole game

The much improved full release of the game on Steam will have at least one additional game mode in which you can fight multiple enemies at a time in a side-scrolling environment. Check the update posts to see how it looks.

Cant wait for it, how much will it cost? or will it be free like this?

Less than $10, the final price hasn't yet been established.

if i turn fullscreen mode, any sound dont work

idk why but my cursor keeps moving up on its own, like i have stick drift but on my mouse. is this a bug?

good game short but i liked it

Is online multiplayer planed in the game?

It's a possibility after the Steam launch.

Good game, cool mechanics (i haven't found any bugs yet)

what engine was the game created on?

Hi, I've made a video about the game and wanted to share some feedback about it, hopefully it is useful to you ^^

-The main concept on the game is quite good, and I'll say that it has some nice arcade machine vibes ^^

-The gameplay mechanics are "simple", they are easy to get into but if you play against another person or the higher AI it really feels quite deep and in a certain way the learning curve isn't defined by the game itself since it relies more on the player to learn about the movement, etc.

-Visuals are on point, the levels are beautiful AF and simple enough to keep the player focused on the fight. I'll say that the particle effects are awesome and more gore than I expected, but it works perfectly ^^

-Adding some polish and depth to the game in general would end up in a flawless little game ^^.Good looking, fun, with interesting gameplay mechanics, and a good addition to the "couch gaming" collection ^^.

In conclusion, the idea is great and I hope you keep working on it. Hopefully this is useful for the development :D, also if you could subscribe that would help me a lot :)

Thanks for the interest! Drasuns is indeed working on it to make a much better version.

does this game have a discord server or something?

Edit: Sorry just found out there's no bug, just my illusion. The player can cut up to four times after a kill.
Not sure if this is a bug or its intended, whenever I perform a kill with a downwards strike, then continue to cut up the body with a downwards cut, I only managed to cut up to 4 times, which is head, hand, hand, torso. The last 5th cut(or cuts) to the remaining legs is missing.

If I remember correctly, a horizontal kill in a medium distance allows the player to cut up to 5-6 times, which includes downwards cuts to the remaining legs.

Its quite satisfying to cut people many times, truly the most attractive feature of the game. 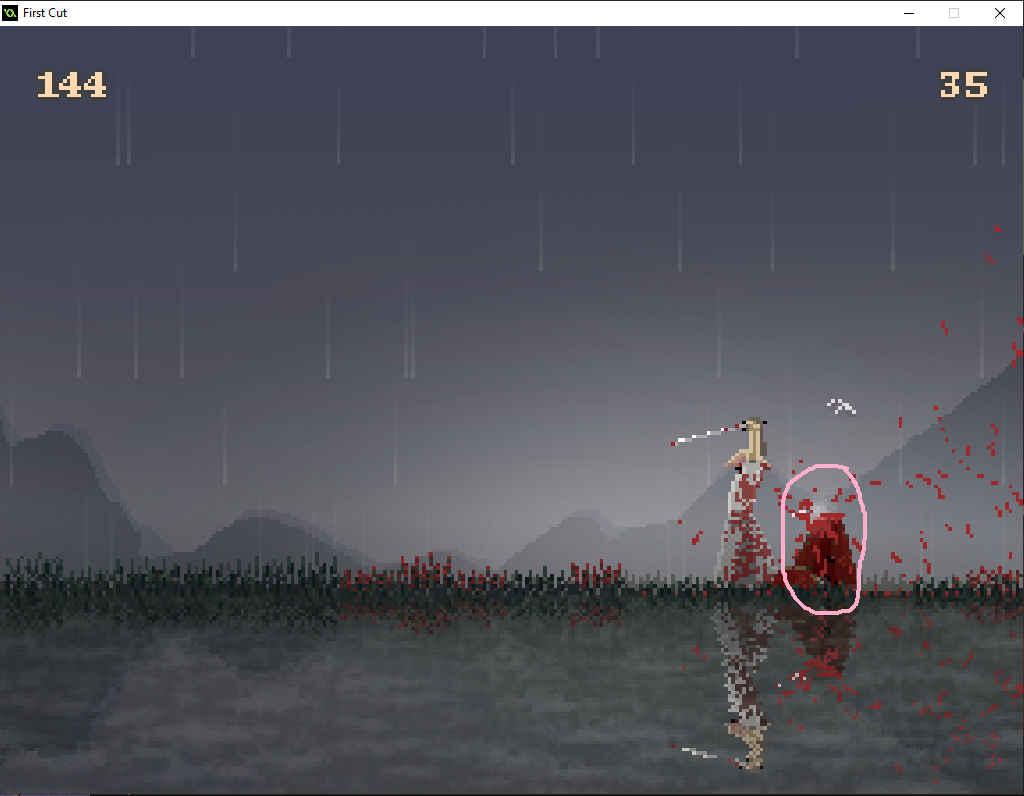 Not sure if the bloody background is unfinished or the graphics has failed to load. But the bloody waterfall area doesn't have a bloody river. 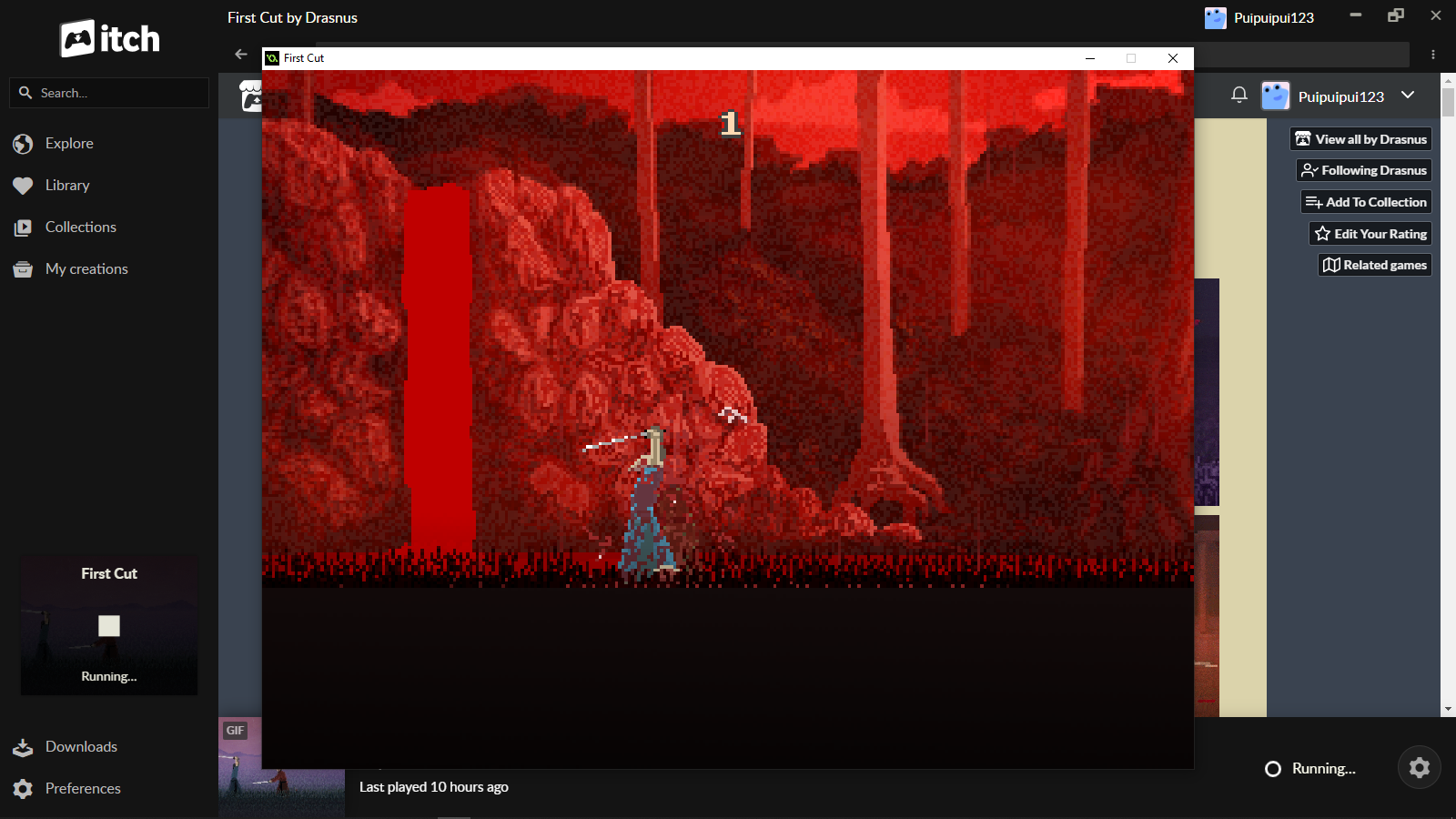 It's a rare random encounter.

Someone explained in detail in the discord server how to use custom backgrounds:

Simple and very polished mechanics, I love it

best game ive played from itch.io, not even kidding

Could you mind telling me in what game engine was this game made?

I use GML code. They just call it 'GameMaker' now because they dropped the 'studio' title recently. They have a subscription model these days, but I bought GMS1 on sale a long time ago and I still use that version, which is unsupported but it has no subscription. Currently they only sell GMS2, with a subscription.

i can finally be the samurai warriors from my japanese anime

Do you have plans for online duels? 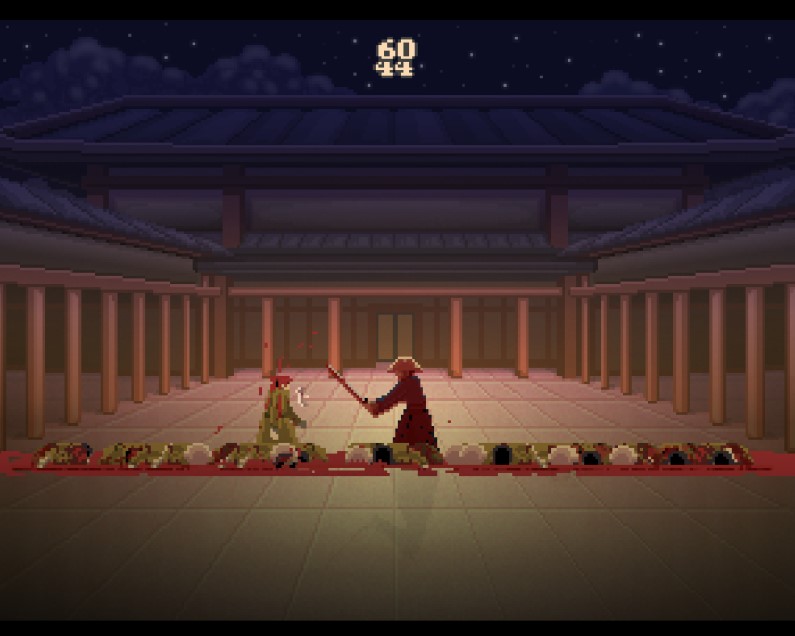 Just scored 44 on master im feeling so proud about myself

i like the way it looks, dodging attacks and the way the player attacks, its, just incredible

This is one of the best portrayals of swordsmanship I've seen in a video game.